The Novelist as an Advocate

The Novelist as an Advocate 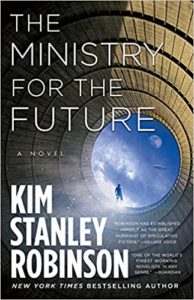 I was tempted to call this newsletter entry, “Reading The Ministry for the Future in the time of the pandemic,” because I found it impossible to not think about the implications of Kim Stanley Robinson’s latest science fiction novel for the Covid-19 epidemic we’re all facing. But this book is about global warming and climate change. Robinson is known as a writer of “ecoscifi,” science fiction with an ecological theme. His subjects have included terraforming another planet ( The Mars Trilogy) or transporting the seeds of earth’s population to a new star system (Aurora) but have also centered around climate change (2312, New York 2140).

In The Ministry for the Future, the author has taken a position and has chosen to use his skill as a novelist to convince his reader of his point of view. The  novel has a plot, a simple one involving one or two characters who are followed throughout the story, but it is also a tutorial—and a political tract. Unlike the typical novel, there are chapters with unnamed narrators, information dumps, as some would call them, but ones that were instructive, fascinating and often startling. Multiple narrators offer opinions and facts, with these narrators ranging from nonhumans, such as a photon, carbon, or “history,” to a refugee, and even a dialogue between an unidentified narrator and the reader. Most of these divergences from the plot are for providing information or a point of view from outside the story’s framework. Evidently the author felt a need to provide information to the reader that didn’t fit within the plot but was necessary for the reader to understand what was going on.

I must admit that my first reaction was that I was not really reading a novel.  I missed following characters through their challenges in more or less a straight line. But I gradually got used to the style, which, I must admit was halfway between a textbook and a novel, or more accurately, a politically-oriented academic text and a novel. However they were presented, the novel’s  messages were clear: Global warming is making the planet unlivable for both humans and other forms of life; daring and dramatic measures need to be taken to save the planet; human nature, human culture, and the neo-liberal capitalistic power structure of society prevent constructive solutions; no part of the world can be left out of the solution and no part does not need to change; for any solution to work, individualism, nationalism, greed, and selfishness must be replaced by collectivism, an inclusive worldview, and global equality.

The book offers radical approaches to slowing global warming, most of which were unfamiliar to me. Seeding the atmosphere with sulfur dioxide to reflect light away from the planet, pumping water from underneath glaciers so they rest on underlying rock and move toward the ocean less rapidly, constructing animal corridors for allowing wildlife to roam from one area to another, a “carbon coin,” which is earned by sequestering carbon as opposed to burning it, and ends up transforming the world economy. And the move to carbon-free transportation using sailing ships, blimps, etc. The actual Ministry for the Future in the novel represents the interests of future generations, an interesting idea in itself,  and its leader, former Irish Minister of Foreign Affairs, Mary Murphy, is the most consistent protagonist, even a heroine of sorts, in the novel. But the book is much more than a story and a plot or a focus on a character resolving a dilemma.

As I said at the beginning of this piece, reading Kim Stanley Robinson’s novel in the midst of a global pandemic was a strange experience for me. In some ways, the Coronavirus pandemic is a preview of how well the people of the world can work together to solve a common problem—one that is deadly, but pales in comparison to the challenge of global warming. There have been some notable aspects of international cooperation, such as the World Health Organization’s COVAX program, which unites 150 nations to share vaccines, with richer nations funding efforts for poorer nations, is an example (which Russia, China and the U.S. have not joined, although Russia and China both support the program, while the U.S. does not). But there has also been backbiting between nations, controversy around closing borders to other nations, and no uniform policy on how to combat the virus. The health interests and business interests have failed to come together, and instead, in every country there is a battle between “opening up” the economy and shutting down businesses and schools to control the virus. And within countries such as the United States, the same disparities that characterize income, wealth and privilege have played a large role in determining who will get sick and who will die from the virus. The ordinary citizens in the U.S. and in many other countries, have been suspicious of government and expert opinion about the danger from the virus, and old  habits have been a barrier to following even the simplest of recommendations to slow the virus’ spread (wear a mask, stay at home, social distance). In many ways, human society has been frozen in its ability to combat the Coronavirus, in much the same way that we have been frozen in our response to global warming.

Albert Camus’ novel, “The Plague,” is a gripping story, revealing about human nature and what determines human choices, but it probably hasn’t caused many people to change their own behavior. Kim Stanley Robinson’s The Ministry for the Future is less a straightforward novel, but it is designed to convince, to explain things to the reader he or she might not understand about the problem, to show that solutions are available, and to provoke the reader into action. The result is a hybrid book, part textbook, part call to action and part narrative science fiction novel. I found it difficult to get into, but absorbing, captivating and immensely rewarding and thought-provoking the more I read. At six-hundred pages, I tried to skim some sections and found myself so drawn into the subject matter that I was unable to do so. I ended up reading it page by page, cover to cover and the upshot is that I’ve had my eyes opened to the role a novelist can play in shaping public opinion, and the responsibility they may bear on issues of the survival of our species.

The Ministry for The Future, is scheduled to be release by Orbit on October 6, 2020. Find it at Amazon