Susan Schneider has said that science fiction sometimes represents  “long versions of philosophical thought experiments.” When I was a young man, I remember reading a book called The Day the Sun Stood Still, which contained three original novellas by Robert Silverberg, Poul Anderson, and Gordon R. Dickson. Each writer was presented with the same scenario: without warning, the sun suddenly stopped moving across the sky, clearly a miracle, and asked 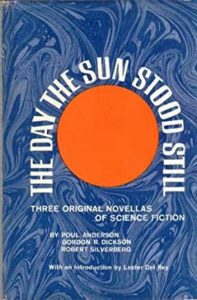 to construct a story about how people reacted to it. Each writer had a completely different take on the premise, all of them unique and imaginative, and revealing about how religion and science are involved in the lives of people. It opened my eyes to the possibilities for using science fiction to examine philosophical questions.

Robert Heinlein’s classic, Stranger in a Strange Land, also used a science fiction scenario—the arrival on earth of a young man who had been raised by aliens on Mars—to examine human society in its reaction to his presence. Written in 1961, the year I graduated from high school, the novel left a lasting impression on me, as I thought about the innocence of the young stranger to human ways and the often selfish, materialistic, and cruel ways in

which society greeted him, and also the protection he received from some. It was a novel that started me along the road to analyzing society, making some, mostly unsuccessful attempts to remove myself enough from it, in the manner of Valentine Michael Smith, Heinlein’s central character, to view society objectively.

Around the same time that Heinlein was writing Stranger in a Strange Land, Walter M. Miller published A Canticle for Leibowitz, a post-nuclear holocaust novel concerning a Catholic Monastery in the United States, but spanning 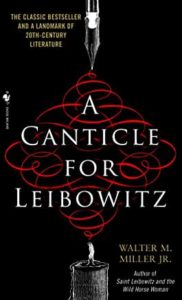 thousands of years for rebuilding human society, the novel explores how science and religion relate to each other, how human nature shapes society and how society changes in response to both ideas and events. In particular, it examines the conflict between science and religion in terms of both truth and power.

Two other books, which had a profound effect on me  from my younger days as a science fiction reader, are Ursula LeGuin’s The Dispossessed and Arthur C. Clarke’s Childhood’s End. In LeGuin’s novel, published when I was a young man, fresh out of the 1960’s college-age conflicts with society, 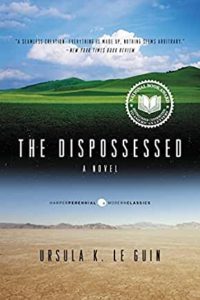 capitalism, and militarism, that characterized that era, the anarchist society of Annares, contrasted with the capitalism of Urras, with the no-ownership of property culture of the former, showed me a flawed, but partly successful and definitely inspiring glimpse at what a lack of private property could bring. It was the embodiment of John Lennon’s “Imagine.”

Arthur C. Clarke’s Childhood’s End, represents my first experience with a novel in which at least part of the subject is the limitation of the human mind in comparison to other types of minds, which in scifi novels, are possessed either by aliens or AIs. For most of the novel, the nature of the aliens, in this case, the “Overlords,” are a 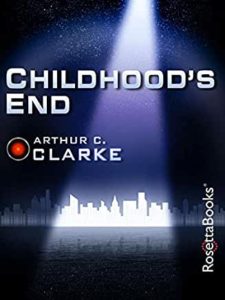 mystery. Their presence is clear because their spaceships are visible from earth, but they only communicate directly with one person, the Secretary General of the UN. The Overlords are eventually revealed to be creatures who resemble our caricatures of the devil, with long noses, pointed ears, and tails. They are threatening in appearance but mostly curious. They have protected earth from its own internecine conflicts for decades and allowed it to flourish. It turns out that they represent a larger interstellar race with a hive-like cooperative identity and mind. Gradually the children of earth are evolving into having such identities and minds. However, in the end, the children’s inability to control the mental powers they possess leads them to destroy the entire planet.

Childhood’s End was written in 1953 and a few years later I actually met Arthur C. Clarke and spent the better part of a day with him along with one of my friends whose father had the job of chauffeuring Clark around before he gave a speech that night. I got Childhood’s End autographed, unfortunately, years later, I lost track of it. But it whetted my appetite for similar books and led me to Stanislaw Lem, particularly his books The Invincible and Solaris. In The Invincible, the aliens are tiny automata, descended from small robotic 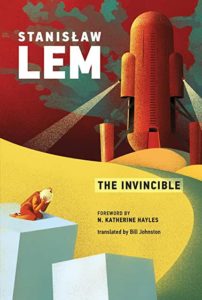 assistants to members an alien race, which crash-landed on a planet. The automata evolve into a collection of tiny “flies,” which, although not individually conscious or possessed of reasoning, use evolved herd behaviors to destroy their alien masters and all other living creatures on the planet’s surface, including the humans. In Solaris, humans discover a planet with only a single creature on it—a massive, alive, ocean, which obeys higher-order mathematical principles and has an ability to create copies of the humans’ most intimate memories. Its purpose, if it has one, and its way of thinking are incomprehensible to humans, including the main character, who learns that there are ways of being that are simply beyond the comprehension of men because the concepts by which we think and perceive provide a limit to our understanding. Lem’s novels are groundbreaking from a philosophical point of view, because they show us that conceptualizing intelligence and consciousness in human terms and elevating it to the peak of evolutionary development is a limitation in our thinking, based upon our anthropocentrism.

The rapid development of artificial intelligence has raised new questions, many of them old questions voiced by philosophers from Plato to Descartes, but rephrased in terms of issues raised by AI and the internet. Are humans nothing more than an elaborate machines made from organic components? Is consciousness confined to organic creatures or could it be achieved by a machine? Will we be able to control the machines we create? In terms of AI, my favorite novel is still Do Androids Dream of Electric Sheep?, the basis for the film, Bladerunner. Rick Deckard, the novel’s hero, has the job of ferreting out 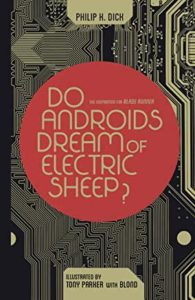 androids, who are posing as humans, and terminating them. His dilemma arises when he falls in love with a woman whom he suspects is an android but is unaware of it. As Deckard begins to realize that the boundary between machines and humans has been blurred beyond recognition, he starts to question his own identity. Could he be an android without knowing it?  For Deckard, whose job is to kill androids, these are life and death questions, both about himself and about the woman he loves. If there is no difference between the humans and the machines, what makes it ethical to terminate one but not the other? It seems to me that the development of AI raises three basic questions: 1. Can an AI ever achieve the status of a person? 2. Will we be able to understand how an AI thinks? 3. Can we control an AI, and if not, would it be dangerous? A variety of scifi novels have considered these questions, primarily number 3, with various doomsday scenarios. Novels such as Daniel Wilson’s Robopocalypse, and Todd McAnulty’s Robots of Gotham, are examples of this genre.