Novels offer escape to other world’s, to other experiences, and to other identities. They can be exciting, scary, exhilarating, arousing, or even inspiring. And, they can make us think. Below are some of my favorite novels that stimulate the intellect as well as the imagination. The list is not exhaustive, and I’m sure I left out some of the very best, which you might be aware of but which escaped my attention. These below, however, are all noteworthy, and certainly worth reading. 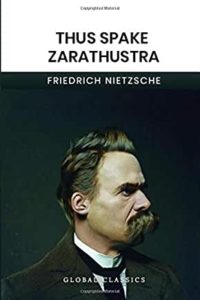 Nietzsche is not an easy read, but this semi-novel, Thus Spoke Zarathustra.  is probably  his most accessible work, and a good introduction to his thinking. Zarathustra is a man who comes down from his mountain retreat and addresses the public, expounding upon his philosophy in an effort to convince the masses. Here we learn about Superman, a state that man can become through his will to power, to overcome his own frailties, including reliance upon religion and the pronouncements of authorities.

Jean Paul Sartre’s Nausea is perhaps the most 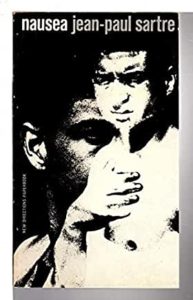 famous existential novel. Set in a fictional French city, its central character Roquentin, is seized by his awareness of the thing-ness of objects, their lack of any inherent meaning; first stones, then papers, a tree, and eventually himself. As he searches ever more desperately for meaning in his own life and those of the people  around him, he is left with a growing dread that all the activities that occupy both he and his fellow humans are shallow diversions, pursued in denial of the ultimate reality that the only truth is nothingness.

The other classic existential novel is Albert Camus’ The Stranger. Its 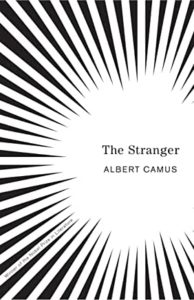 protagonist, Meursault, is less in anguish about the meaningless of his life than he is content to live it, allowing the demands of others, his own whims and physical urges, and the constraints of his social situation to push him to and fro, while he feels detached from it all, perhaps sensing its absurdity, his only rebellious act of individualism being to occasionally refuse to participate in what society expects of him. Eventually, he commits a murder, unplanned, arbitrary, and carried out as if without his own self willing it. In jail, he muses about what his life amounts to and what act, if any, is capable of making him feel that he is in charge of defining who he is. 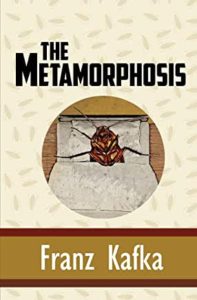 Often interpreted as existential,  Franz Kafka’s  classic, The Metamorphosis, begins with Gregor Samsa waking up one morning to find himself a giant insect, a reflection of his place as an interchangeable cog in the working world and little more than a source of income for his family. In a similar vein, the more modern, The Diagnosis, by Alan Lightman  presents a  protagonist, Bill Chalmers, who develops an undiagnosable disease in which he gradually loses both feeling and movement in his body while feverishly trying to keep up in a meaningless job in a company whose function he doesn’t understand. Both The Metamorphosis and The Diagnosis, present  metaphorical reactions to the pace and meaningless of modern work (and in The Diagnosis, the increasingly impersonal electronic world), and the dehumanization that happens to individuals in modern society.

I won’t cover science fiction novels, which Susan Schneider describes as  often being “long versions of philosophical thought experiments,” because I’ve discussed the genre extensively in other posts. What I will tell you about is a number of novels, I never knew existed, that I found particularly thought-provoking.

Alan Lightman’s Einstein’s Dreams, describes a day in the lives of the people of Berne, Switzerland in more than thirty different iterations, each one based upon a different interpretation of time, supposedly emanating from the dreams of Albert Einstein. 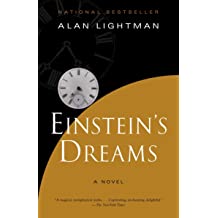 In The Buddha’s Return, by Gaito Gazdanov, a University student in Paris has episodes involving visions and physical sensations, in which he becomes a person who is dead or dying, or in one instance, being interrogated in in jail in a totalitarian state. He meets a beggar who later becomes rich, dies wills him his fortune. The Buddha’s Return Includes issues 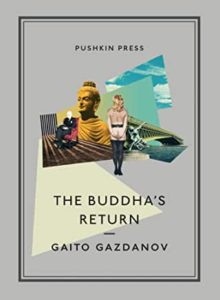 of identity, helplessness in the face of an authoritarian state, social class and the inability to escape from one’s class, and the randomness of life events.  A fine combination of Crime and Punishment and both Nausea and The Stranger.

Walker Percy’s The Moviegoer, written in 1961, may be the classic American existential novel. Binx Bollling, the main character, resembles Camus’ Meursault more than Sartre’s Roquentin. He is less in anguish than he is in denial, his effort to avoid what he calls the “malaise”  of ordinary life, a sense of the meaninglessness that overcomes and depresses him when he finds himself engaged in routines that are defined by senseless social conventions—perhaps similar to Camus’ idea of absurdity. 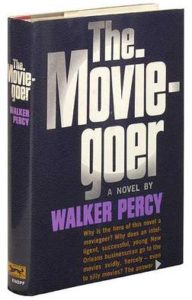 What sets Binx apart from Roquentin and Meursault is how ordinary and appealing he is as a character. Most  of us do not suffer the anguish suffered by Roquentin, nor are we as detached as Meursault. We do find ourselves engaging in activities that we suspect are meaningless and having to make an effort to stave off the sense of malaise that accompanies the routines that dominate our daily lives. Binx Bolling is an easy protagonist for many of us to identify with.

Daniel Quinn’s novel, Ishmael, has a talking and in fact, telepathic gorilla lecture an inquisitive human on the “secret of the universe,” which is that man is not at its center and neither the universe nor our own solar system and earth were created for 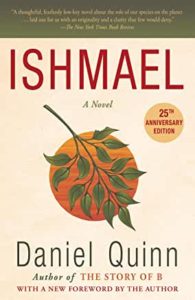 man’s use. Ishmael not only expresses the idea that human intelligence is limited, but also that it is just one type of intelligence, and one that may blind us to the necessity that our species has to live compatibly with the natural environment around us.

Philosophical, thought-provoking, each of the above novels is worth reading for its ability to make you think as well as be entertained.

One more book.  This time it’s mine, and it’s free! It’s not fiction, but Is God Really Necessary? is a book that raises many of the big questions raised by the novels

above, and it gives answers that are at least partially satisfying to me. Take a look and see what you think. It won’t cost you a dime.  To get your free Kindle copy, click HERE