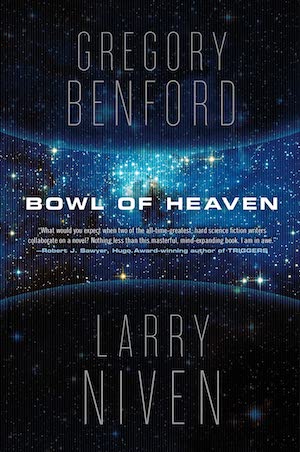 Bowl of Heaven and Shipstar

I’m embarrassed to say I have never read any of Larry Niven’s classic Ringworld Series, but after reading his and Gregory Benford’s “Bowl of Heaven” and “Shipstar,” I certainly will. 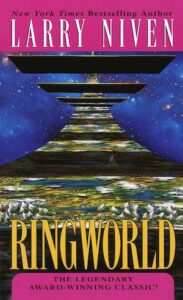 Published in 2012 and 2014, this series also includes “Glorious,” a third installation, published in 2020, which I’ve yet to read. All three are written by the hard-science fiction duo of Benford and Niven, the former a Professor of Physics (emeritus) at UC Irvine and Nebula award winner and the latter, one of the most well-established sci-fi writers alive.

The setting and the characters in “Bowl of Heaven” and “Shipstar” are bigger than life, although they are confronted by life-size humans, heading for “Glory,” a strange and distant star system that is radiating magnetic waves, which may or may not be messages, and its star is orbited by what appears to be a habitable planet, with conditions much like earth’s. 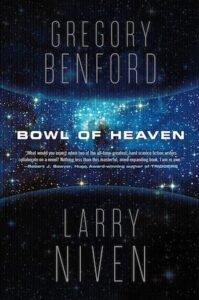 On the way to Glory, Sunseeker, a starship laden with a thousand mostly sleeping human occupants, encounters a giant, constructed object, an immense bowl as large across “the orbit of Mercury” harnessed to a central star, which it is pushing through space at a hefty fraction of the speed of the Sunseeker.

As it turns out, the bowl’s inner surface is occupied by a myriad of species, overlorded by bigger than elephant-sized “Folk,” which appear to be large, feathered, but ground-dwelling dinosaurs. When the Sunseeker sends crew to the surface to explore the bowl, some of them are captured and some escape. We are treated to the point of view of Memor, one of the ruling Folk, who is interested in examining the minds of these human “late-invaders” and assessing their suitability to be “adopted” as another species living on the bowl.

Humans are unruly, clever, and dangerous, something that Memor and the other Folk find out when they try to capture the escaped crewmembers. Those who escape are only now and then able to communicate with Redwing, the Captain of the Sunseeker and ally themselves with various other species, some of whom are allies of the Folk and some of whom are resistant to the Folk’s control. As it turns out, the Folk are not the Creators of the bowl, and neither are they its most powerful occupants. Above them are more mysterious “Ice-minds” and the “Diaphanous,” inorganic intelligences of space and energy who built the bowl originally and populated it with species it encountered on its journey across the galaxy and, now to Glory, the same destination as Sunseeker and its human occupants.

The two novels are the story of the tribulations of the human crews who are pursued by the Folk across the bowl until the higher minds eventually intervene and agree to collaborate on the journey to Glory.  I presume “Glorious,” the next book in the series will be about the arrival of Sunseeker, perhaps followed by the bowl, at Glory and what 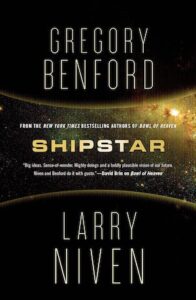 the humans and the others find there. These first two books contain fascinating scientific imagination, bolstered by enough genuine phenomena to make them sound at least faintly plausible. The plausibility is greater with regard to the description of the physical and energy forces at play on Sunseeker and on the bowl, than it is with that of the various species that inhabit the bowl or the higher-level intelligences. Most of them think more or less like humans, their language translated into English (or Anglish) with some exceptions for nonverbal gestures and displays. That even stones, ice and photon streams are both minded and able to communicate their thoughts to humans, is a highly improbable form of panpsychism, which itself is improbable. However, such excursions beyond science add elements of mystery and wonder to a story filled with scientific-sounding concepts and, occasionally, digressions.

“Bowl of Heaven” and “Shipstar” are highly imaginative hard science fiction. The science, which may be grounded in real physics but is still profoundly speculative, revolves around the bowl itself and the Sunseeker. The most imaginative fun is provided by the various aliens, which, besides the feathered dinosaur-like Folk, include blimp-like flying fish that serve as airbuses, “spidows,” which are different forms of spider and crab-like predators, clawed, speaking snakes, talking rocks, proto-humans and countless other species. The humans are resilient, sometimes quirky, and have definite personalities, who are real enough to make the reader involved and care about their fate, which is still undecided at the end of the second novel. Their story makes it a sci-fi adventure, not just a technical tour-de-force. 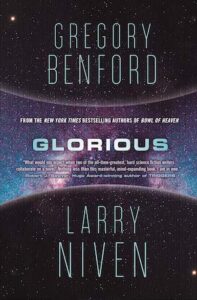 If you like science fiction that teaches you something, expands your imagination, and keeps you on the edge of your seat turning page after page, “Bowl of Heaven” and “Shipstar” are going to delight you. I can’t wait to read “Glorious,” the final (I assume) chapter in this saga.