Imagine a truth that is so secret, so personal, so painful, so precious, or so embarrassing that you don’t dare tell it to anyone else. You can write about it. Disguise the characters, make the conflict symbolic, fictionalize the account. Your story is similar to the truth, even if not exactly accurate to the letter. It’s similar because the pain, the joy, the fear, the anticipation, the guilt, the profundity are still there, true to life, but told fictionally or poetically. Now imagine twenty experienced authors creating such stories and poems and putting them in a single book. That’s what you’ll find in The Truth That Can’t Be Told, 2. The 2 represents the fact that this is the second time this group has done so, growing from ten to twenty contributors from the first volume to the second.

Everyone had the same mandate: write a short story or poem that fits the topic of a Truth That Can’t Be Told. Beyond that, the rest was up to the imagination and experience of the writer. Everyone did it and most wrote several pieces, all of which are included in this volume. The variety of responses to the same request is mind-boggling. One third of the contributions are poems, ranging from a few stanzas to several pages long. The other contributions are short stories. The topics are amazingly broad, as broad as the experiences and interests of twenty people who have nothing in common except a dedication to writing and literature. 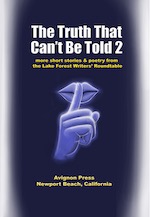 There are baseball stories, dating stories, lots of wistful, sometimes painful, memories. There are war stories, fantasies about witches or robots, musings about the creation of the universe, about history, about death and life’s meaning. Poems encompass pain, hope, guilt, beauty and those moments that touch all of our secret hearts.

I’m in there. I wrote the introduction, a long romantic and wistful poem, and one of my signature mystery stories involving, of course, robots. My stories just touch the surface of a trove of literary pieces that capture what every one of us holds deeply and secretly inside ourselves. My co-authors plumb the depths of that trove.

I can’t say enough about The Truth That Can’t Be Told, 2, except to urge all of you to read it. It’s not expensive and is in paperback, hardcover, and Kindle formats. Take a look. Read more about the book and sample its reviews on Amazon at HERE.

Casey Dorman is the author of the scifi thriller, Ezekiel’s Brain. Buy it on Amazon.